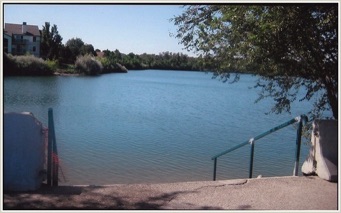 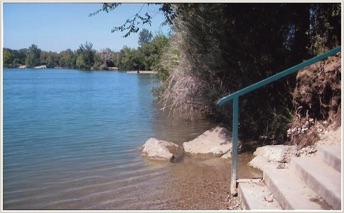 Quinn's Pond is at the end of Pleasanton Avenue.  (It was called Bob Rice Pond for many years as it was directly behind Bob Rice Ford which was on Fairview ~ Clocktower apartments were built there in the 80's and people started calling it Clocktower Pond.  The actual name is Quinn's Pond, see below for the history of Bernardine Quinn.)

A temporary parking lot has opened at the CWI parking lot (the former Bob Rice Ford location) on Main Street. There is a port-a-pottie on site.  Bring water, towel, snacks and a tarp is useful to put your gear on.

The City of Boise named the pond after Bernadine Quinn:

Bernardine Quinn, a native of La Crosse, Wisconsin, moved to Boise in 1910 after her father established a cleaning supply firm in the City of Trees. A graduate of St. Teresa's Academy, Bernardine later served as secretary of the Boise Chamber of Commerce.

In 1924, Bernardine married Maurice Harold Quinn, founder of the Quinn Robbins heavy construction company. A longtime member of the Catholic Women's League, Bernardine was active in the church throughout her life. She was also involved in civic organizations, including the Silver Sage Council of the Girl Scouts and St. Alphonsus Hospital.

The 22-acre pond is located in what is now called the Bernardine Quinn Riverside Park, an undeveloped park adjacent to the Greenbelt and the Clock Tower Apartments just west of Main Street. Quinns Pond is used regularly by neighbors, boaters, anglers and scuba divers.

Previously the park was the site of a gravel operation for the Quinn Robbins heavy construction company. Land for the park was donated to the City of Boise in 1997 and subsequently named for Bernardine Quinn, wife of the company founder.

The park is one of the "Ribbon of Jewels" named for prominent local women. 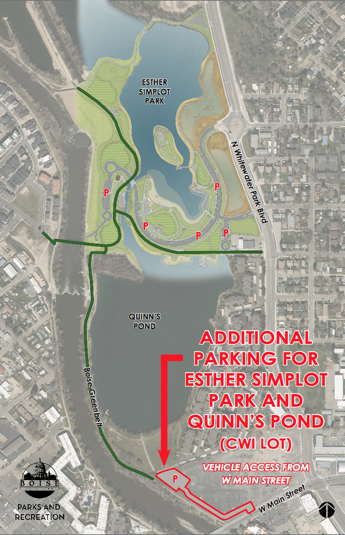