This email is from several years ago, however, it's important that we stay up-to-date with what is happening in the ocean and shark community.  This is just a reminder as to what will happen to our sharks if we don't get involved.  Finning is still happening today! Ecuador still allows (as of 2014) fishermen to take sharks fins.  Although the Galapagos are protected, the shark-finning which is now allowed right up to the protected area of the Galapagos WILL unfortunately impact the variety and abundance of the undersea life in the Galapagos archipelago – not just the sharks, which have already been hit hard, but all the other sea life in the chain.

Shark fin soup, a traditional Chinese delicacy associated with prosperity, honor, and good fortune, has been a highlight at important occasions such as corporate banquets, weddings, and New Years celebrations for over 2,000 years. One of the eight treasured foods from the sea symbolizing wealth and fit for an emperor, hosts serve shark fin soup to honor their guests and fear their guests would be insulted and they would be considered "cheap" (or lose face) if shark fin soup is not served. Once reserved for special occasions, shark fin is now commonly consumed in major cities as an indication of stature – with its prevalence highlighted by the fact it is even served at low cost buffets. . . Surprisingly, shark fins are flavorless, and the quality of the soup relies upon the broth – which is typically chicken stock. Fins are really only utilized as a thickening agent. Different shark species have different associated value (the more rare, the more prestigious and expensive the soup) and soup containing a full fin (vs. pieces) is far more desirable as well.  (seashepherd.org)

Sharks are a very important part of the ocean community and important to the balance of life in the ocean.

This is a special "ocean conservation" email from Peter Hughes Diving to inform you of a very recent change (July 30, 2007) in Ecuador law that now allows the legal sale and exportation of shark fins and products. The practice had been banned in all of Ecuador until July 30th.

In short, this change opens the legal door to shark over-fishing and the even more despicable practice of "shark finning" (just cutting off the fins and throwing the body of shark, sometimes still alive, back into the sea to die) in Ecuador.

But the new government decree in Ecuador will prove absolutely devastating to the sharks and marine population of the Galapagos.  We have included information below to give you a clearer understanding of the situation, and respectfully ask you to review it and write to us with your opinion. We will share those thoughts and opinions with President Rafael Correa, the government, and media of Ecuador.

Once again, we ask for your help to restore a full ban on shark finning and commercial shark fishing in Ecuador, and thank you in advance for your consideration...

Thank You and as always... Be Ocean Minded,

Galapagos and Shark Finning: The Facts

Historical: Conservation efforts began in the Galapagos as far back as 1936, and in general have been progressive, if a bit difficult to monitor in a marine park area encompassing more than 50,000 sq. miles, most of it open ocean.  Named a UNESCO World Heritage SIte in 1979, the Galapagos instituted stringent conservation measures, including banning the commercial sale of sharks from the waters of the Galapagos. Subsequent efforts include the formation of the Galapagos Marine Reserve in 1998, and the additional designation by UNESCO as a "Natural Heritage Site" in 2001.  Despite overall progress, illegal fishing has been observed and reported within the National Park, and continues to this day despite strict regulations against it.  Shark Fishing as an industry was banned throughout Ecuador until July 30, 2007.

July 30, 2007: The Government of Ecuador, in an apparent effort to assist local fishermen on the mainland of Ecuador, and directly through the office of President Rafael Correa, repealed Decree 2130.  Decree 2130 specifically banned the exportation and sale of shark meat and fins from all of Ecuador.

With a single stroke of a presidential pen, the sale and exportation of shark meat and fins is now legal from the mainland of Ecuador as long as the fishermen attest the sharks were caught "incidentally" while fishing for other legal species. This is known as "by-catch" in fishing circles.  While shark fishing and finning is still banned in the Galapagos, this legal "loop-hole" in Ecuadoran law opens the door to widespread commercial poaching and illegal shark fishing and finning in the waters of the Galapagos Marine Park.  Why? For the same reason Willie Sutton used to give when asked why he robbed rob banks ("that's where the money is...").

Galapagos is where the sharks are! And that's where the fishermen are going to go to get them.  Recent news reports in one of the largest newspapers in Ecuador and a scientific study published in 2005 by the conservation group WIldaid both report this very, very troubling statistic:  " Up to 80% of all sharks and shark fins landed on the mainland of Ecuador come from the waters of the Galapagos Islands"

Laws don't mean much to a finned shark, and while the situation in Ecuador "on paper" appears to protect the shark population of the Galapagos (it is still banned as an activity there), the very troubling reality is the fishermen are going to go after the sharks and then land them "legally" for sale and exportation on the mainland of Ecuador.  Ecuador has a relatively small navy and a very limited government Fisheries department, so enforcement of any regulations is difficult. With the new legislation, it will be virtually impossible to tell where the sharks (and fins) actually came from, but perfectly legal to sell and export them. That's extremely bad news for the Galapagos. 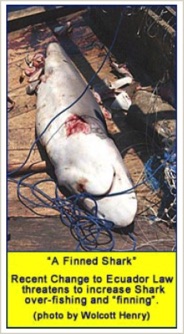 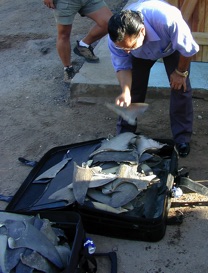 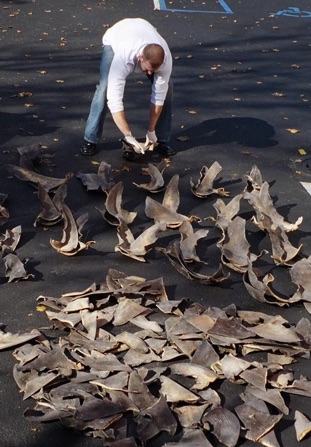 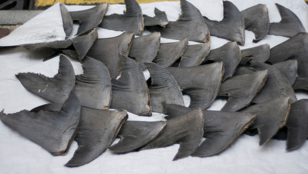 Shark Fins Drying on a street in Hong Kong 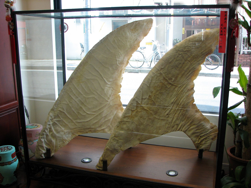 Shark Fins on display in a pharmacy in Yokohama 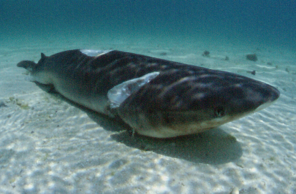 A "finned" shark thrown back in to die

There are quite a few organizations and people who are working hard to try and protect our sharks.  Sharks are a necessary part of the underwater environment.  In areas where they have been decimated, the whole ecosystem suffers.

Check out PADI's Project Aware Page and please do your part to help.  If we all work together, we CAN make a difference!