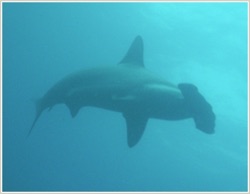 Shark Attack: What Are the Odds?

In the wake of annual news stories about shark attacks, it's difficult not to hear that telltale theme song in your head as you head to the beach. But shark attacks are actually quite rare. For example, according to the International Shark Attack File, in 2005 there were only 58 unprovoked shark attacks on humans, 38 of which occurred in the United States.  Thirty-eight attacks out of a population of about 300 million.  This means the odds of being attacked by a shark in the United States are roughly 1 in 8 million.

Some pages to check out:

Click here for the link to Disney and Shark Fin Soup -- you'll see the difference awareness and action can make.

You'll want to see the page 20 Ways Sharks Help Humans.  You'll see why we need to protect our sharks.

Check out the Diver Fears page.

So you don't miss it, check out the page & articles on Shark Finning -- this practice MUST be stopped!

Shark Attacks: What Are the Odds?

Guest commentator Debbie Salamone is Communications Manager at the Pew Campaign to End Overfishing in the Southeast.

There's nothing like a good shark attack story. I should know. I was a journalist for 21 years near Volusia County, Florida — the shark bite capital of the world. I even made sure someone phoned my newspaper to report my own shark attack as I was pumped full of morphine and wheeled into the operating room.

Sharks always seem to be taking the rap as man-eating villains –- in the media, movies and books. So let's get a little perspective. Your chances of being attacked by a shark are just one in 11.5 million, according to the University of Florida's International Shark Attack File.

Even digging a sand hole is more dangerous…

The New England Journal of Medicine reported that from 1990 to 2006, 16 people died by digging until the sand collapsed and smothered them. ISAF counted a dozen U.S. shark deaths in the same period. Clearly, you'd be safer in the water, with the sharks.

Still not convinced? Consider another ISAF statistic: In one year in the U.S., sharks injured just 13 people while nearly 200,000 were hurt in accidents involving ladders, toilets and chainsaws.

And in an older, but memorable study by the Consumer Product Safety Commission, researchers tracked vending machine deaths from 1977 to 1995. Thirty-seven people were killed when they toppled a vending machine to get a reluctant quarter or cola — an average of about two per year, or twice the number killed by sharks in the US. Just when you thought it was safe to get a Dr. Pepper…

You get the picture.

Even when they do happen, most shark attacks are “hit and run” — the shark takes a bite, realizes it made a mistake and moves on to something more delicious. That's what happened to me. Devastating injuries and brutal attacks are much more unusual.

Sharks may not appear as the most cuddly creatures on Earth, but they are worth saving for the health of the entire ocean ecosystem. Learn more about the threats to sharks and the importance of preserving them at www.pewsharks.org. And if you're still afraid to go back in the water, more comforting statistics on the risk of shark attacks are available at ISAF.

Link to this article on Discovery.com

Here is an article about Discovery Channel's Shark Week (2007), talking about how sand holes kill more beachgoers each year than sharks do.  This goes right along with the Shark Attack Odds Quiz (above).

Meet up with a shark,

in or out of the saltwater

Starting Sunday, cable TV's longest-running event, Shark Week, celebrates its 20th anniversary with 130 hours of jaw-snapping programming - and vacationers' simultaneous fear of and fascination with the Voldemorts of the deep continues unabated.

Shark Week, a summer staple that draws about 20 million viewers, has had "a huge impact" on the small but booming world of commercial shark diving, says Patric Douglas of California-based Shark Diver. The company is one of several that tout underwater meet-ups with great whites near Isla Guadalupe, off Mexico's Baja Peninsula. More than a dozen outfits sell similar cage dives with great whites in South Africa, and close encounters with more docile reef and whale sharks are offered in the Bahamas, Mexico, Tahiti and elsewhere.

The shows' influence has played out indoors, too: The Association of Zoos and Aquariums is celebrating next week's 20th anniversary with feeding demonstrations, dive shows, shark movies, touch tanks, prizes and giveaways at 27 member aquariums and zoos.

"We live in a world where pushing the envelope has become the norm, and sharks sell," says marine biologist George Burgess, director of the University of Florida's International Shark Attack File. Despite frenzied publicity over events such as last weekend's tiger shark attack on an Ohio vacationer snorkeling off Oahu, shark-related injuries now average about 60 a year worldwide, Burgess says. (In 2001, the year Time did a cover story dubbed "Summer of the Shark," there were 68 attacks worldwide, down from 79 the year before.)

In fact, swimmers' chances of being bitten have dropped over the past decade, despite a sharp increase in the number of people at the beach, in part because of intense overfishing of sharks.

Discovery's Shark Week "has had its ups and downs. ... Some of their early shows were atrocious in terms of factual content and shock value" and reinforced sharks' unwarranted reputation as "blood-thirsty animals out to get humans," says Burgess, who will appear in next week's show Oceans of Fear.

Shark Week is "the devil you know and the devil you don't want to know," says Shark Diver's Douglas, who, like Burgess, will appear on one of next week's shows. But, he says, "you can't underestimate its influence."

Link to this article on USAToday.com

There are those organizations and people who are working hard to try and protect our sharks.  Sharks are a necessary part of the underwater environment.  In areas where they have been decimated, the whole ecosystem suffers.

Check out PADI's Project Aware Page and please do your part to help.  If we all work together, we CAN make a difference!